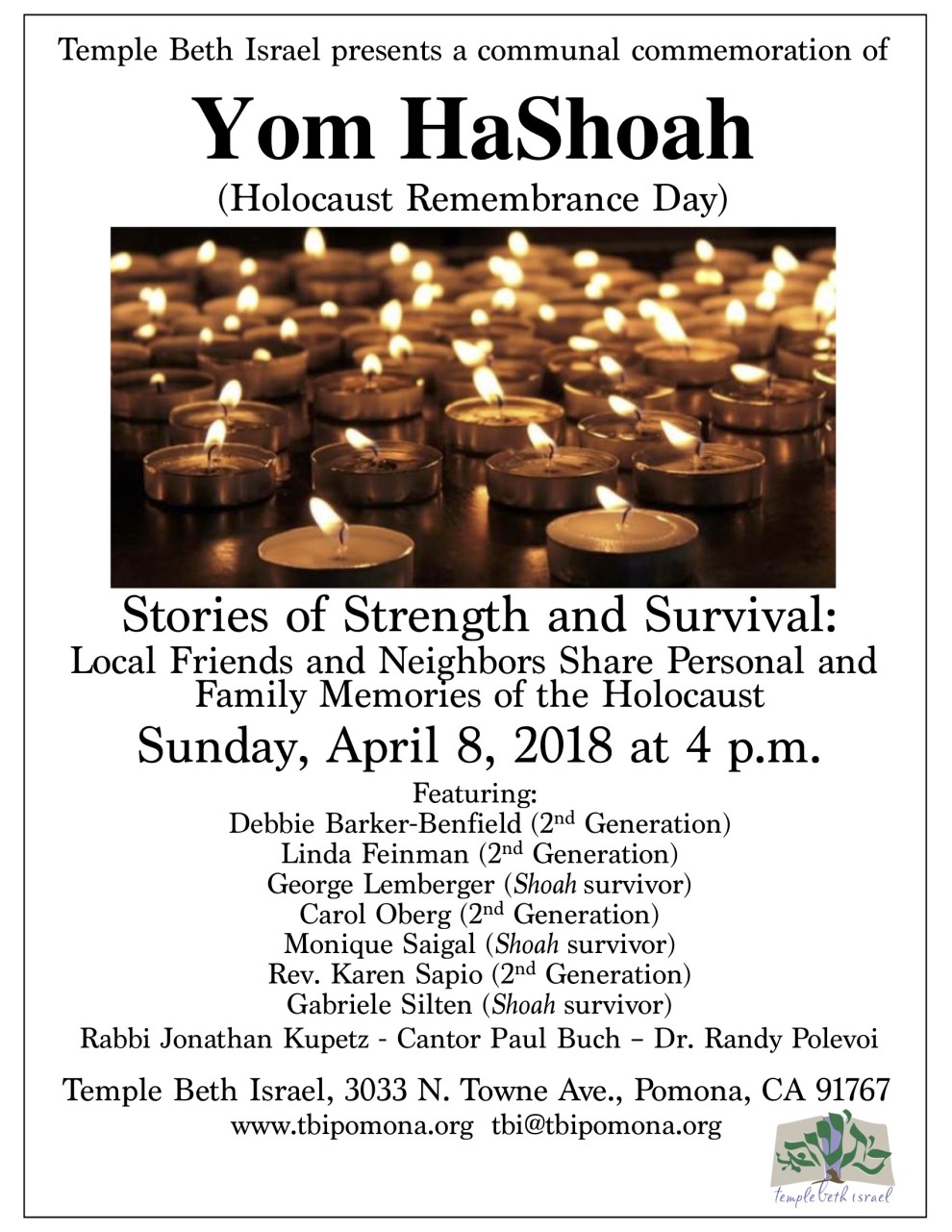 Each year, Temple Beth Israel holds a special commemoration of Holocaust Remembrance Day (in Hebrew- Yom HaShoah) with the express purpose of educating both the Jewish and the wider communities about the lessons learned from that terrible period in history, and also to honor the millions who fell victim to Nazi terror.

This year, the synagogue’s program will feature the remembrances and experiences of seven members of the local community, both those who survived the horrors of the Nazis themselves, and those who are the children of survivors (a.k.a. the “Second Generation”).  The event will take place on Sunday, April 8that 4 p.m. at TBI, 3033 N. Towne Ave., Pomona, and will include Monique Saigal of Pomona College, who experienced the Shoah as a child, Rev. Karen Sapio of Claremont Presbyterian Church, the child of a Holocaust survivor, and Gabriele Silten, who survived the war after being held at the Theresienstadt (Terezìn) camp in what is now the Czech Republic. Four additional “Second Generation” members will also speak.

The program, developed under the guidance of Holocaust educator Marilyn Lubarsky, will also include the participation of Rabbi Jonathan Kupetz, and Cantor Paul Buch and pianist Dr. Randy Polevoi, who will present music of and about that dark period.  A memorial candle lighting will take place, and each attendee will receive a candle to light at home, courtesy of the TBI Brotherhood.

“Anti-Semitism was not defeated along with the Third Reich,” said TBI’s Rabbi Jonathan Kupetz, “it is still in the news almost every day. And while we remember the millions murdered, it is vital that we hear the stories, while we can, of those who were the direct victims of Nazi terror, and of those who survived and passed their legacy on through their children.”

There is no charge to attend and all are welcome.  In keeping with the spirit of the event, there will not be a formal reception following the program, but there will be an opportunity to meet the participants immediately afterwards.  No prior reservations are required.

For further information, contact the TBI Office at 909-626-1277 or through email to tbi@tbipomona.org.