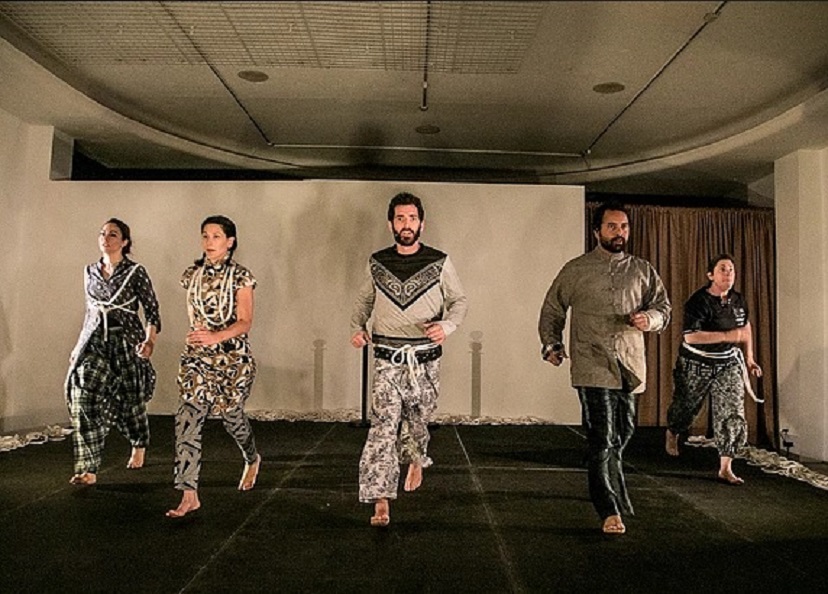 Theatre dybbuk will premiere the original work Lost Tribes at Armory Center for the Arts on Thursday, March 29, 2018, 8:00 p.m. – 10:00 p.m. Inspired by the stories of the lost tribes of Israel, theatre dybbuk presents a full-length theatrical work, rich in movement, original music, and lyrical language that relates ancient mythological and tribal narratives to contemporary questions of integration, appropriation, and belonging.

In the early eighth century BCE, the Neo-Assyrian Empire conquered the Northern Kingdom of Israel, from whence it has been said that ten of the twelve ancient tribes of Israel were deported and assimilated. These tribes are now lost to history, with a variety of folktales, legends, and theories about their fates having come about since that time. Some are told from the point of view of those who regard them-selves as members of a lost tribe, while others are told from an outside perspective in order to make a case for self-serving outcomes.

Framed in the context of a gallery exhibition, lost tribes weaves together stories from the Assyrian con-quest to the present day, tracing a world history of assimilation and dominance; of cultural conquest, an-nihilation, and survival. The performance incorporates choreography by Kai Hazelwood and a live per-cussion score composed by Michael Skloff, created in collaboration with Emilia Moscoso Borja and Alex Shaw. The production is written and directed by theatre dybbuk’s artistic director, Aaron Henne, and was developed with the ensemble.

The work will tour throughout Los Angeles during the winter and spring of 2018, creating a city-wide experience.

Visit www.theatredybbuk.org/lost-tribes for more information. The Armory Center for the Arts is located at 145 N. Raymond Avenue in Pasadena.

With an in-depth development process that can range from a few months to two years, Artistic Director Aaron Henne builds each piece with a cast of dedicated professional actors, dancers, musicians, and scholars. The resulting works, from the dark and visceral dance theatre of cave… a dance for lilith, to the re-imagining of the Hellenistic play, exagoge, as a treatise on immigration and assimilation in con-temporary America, to the life-affirming, music-rich festival piece assemble: modern spin | ancient cele-bration, are unique in the world of theatre and Jewish art—challenging, strange, and beautiful to be-hold.