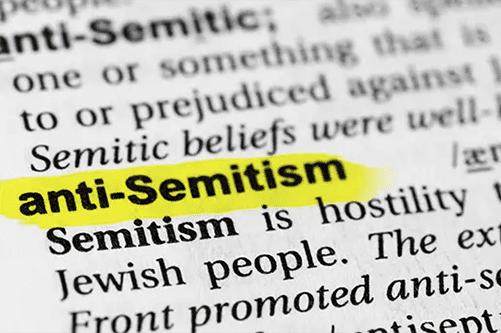 Last week, I was contacted by the editor of the Claremont Courier to get a quote about the recent Jew-blaming flyers that had hit Claremont driveways over that weekend. Sadly, as I explained, as horrible and despicable as the flyer was, it was not illegal because Jewish driveways were not targeted; instead, they were randomly strewn across neighborhoods. You can find the article Hate comes to town: Claremont driveways littered with antisemitic flyers, including quotes from Rabbi Jonathan Kupetz and Cantor Paul Buch (both from Temple Beth Israel of Pomona), by clicking here.

During my conversation with the Claremont Courier editor, I thanked him for deciding that it was important to report this incident. I also expressed how much the Jewish community has appreciated the outpouring of support and coverage that the media has given to this current hate climate that the Jewish community finds itself in today. The number of articles I have seen in both local and national newspapers/media sites has given me hope that people are starting to understand the severity of the ongoing baseless accusations being hurled at Jews and how impactful it has been for us.

If you have not already seen, the Anti-Defamation League (ADL) just published the results of a survey of antisemitic attitudes in the US it recently conducted. The survey’s results are alarming. The survey asked respondents to rate the truth of 14 classically anti-Jewish statements and found that 85% said at least one of them was “somewhat true” or “mostly true.” This included such statements as “Jews are more loyal to Israel than to America,” “Jews have too much power in the business world,” and “Jews don’t care what happens to anyone but their own kind,” to name just a few. Based on the alarming survey results, the ADL reported that antisemitic attitudes are much more widespread than initially thought and are likely increasing.

I share this information as context for this weekend’s Every Person Has a Name, our community’s 25-hour Holocaust commemoration and vigil. In many ways, it illustrates the importance of this event now more than ever. As I have said on multiple occasions, this event serves as a reminder of what can happen when hate goes unchecked. So, not only does the event remind us of this but also of the importance of remembering and learning from our past.

If you cannot attend the ceremony, sign up to read names in one of our handful of 30-minute name-reading slots or stop by at some point during the 24 hours of name-reading. And while you are there, you can view a special exhibition from Yad Vashem, Israel’s National Holocaust Museum, entitled With Me Here Are Six Million Accusers: The Eichmann Trial in Jerusalem. The exhibit was made possible through support from PJTC Sisterhood.

I look forward to seeing you there and showing everyone that hatred of any kind is wrong and is not who we are as a society.